Well, after many months of looking at our day counter, the big day has finally arrived! 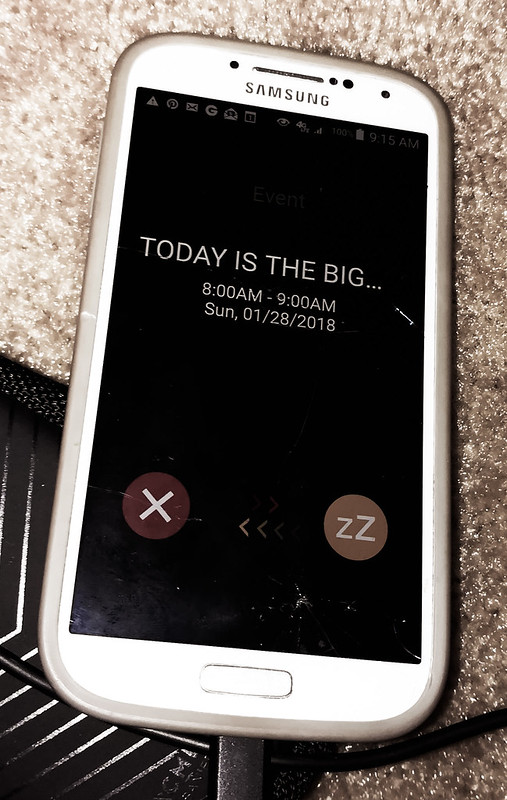 We had too much luggage, more than enough for six people. Do we have everything?! Our airline allows 20kg per checked bag, a carry-on and a personal item. First, we were hoping that would be enough, but after seeing what that looked like in one big pile, we began to think we had too much. I began to worry if we would fit in the car. 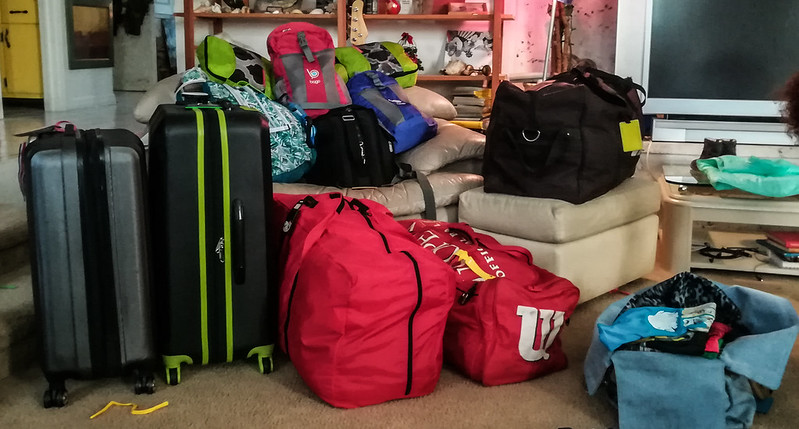 Jackets take a lot of precious space, so we planned to wear our jackets on the plane. Plus, we would probably need them after landing. Here are Jacob and Grayson sporting their European look. 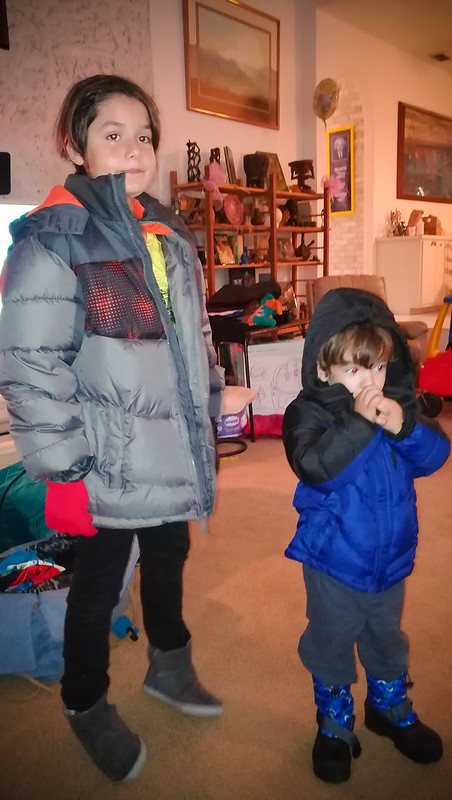 We managed to pack everything into the Dodge Caravan that we rented. We left early to leave time for eventualities, but we only need to drive across the alley to Fort Lauderdale. 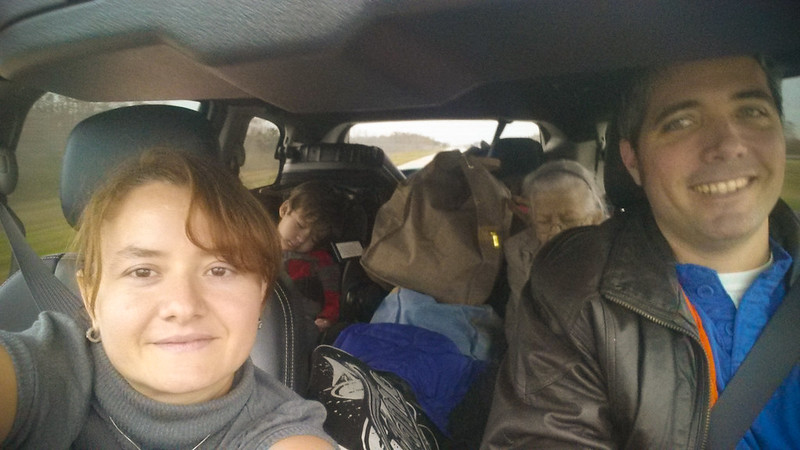 Janson thought this was a good time to charge his batteries. 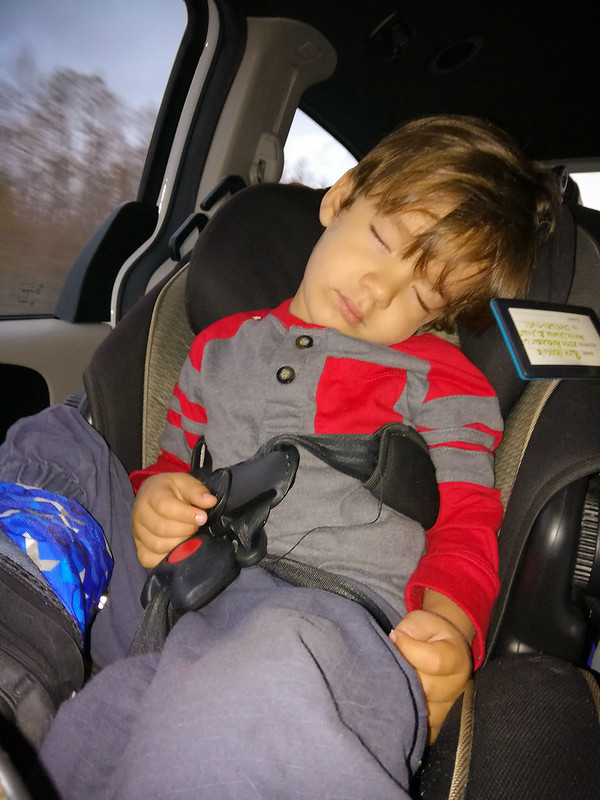 Alligator Alley is a long straight and – after having done it many times – fairly boring ride. It’s a perfect time for some selfies! 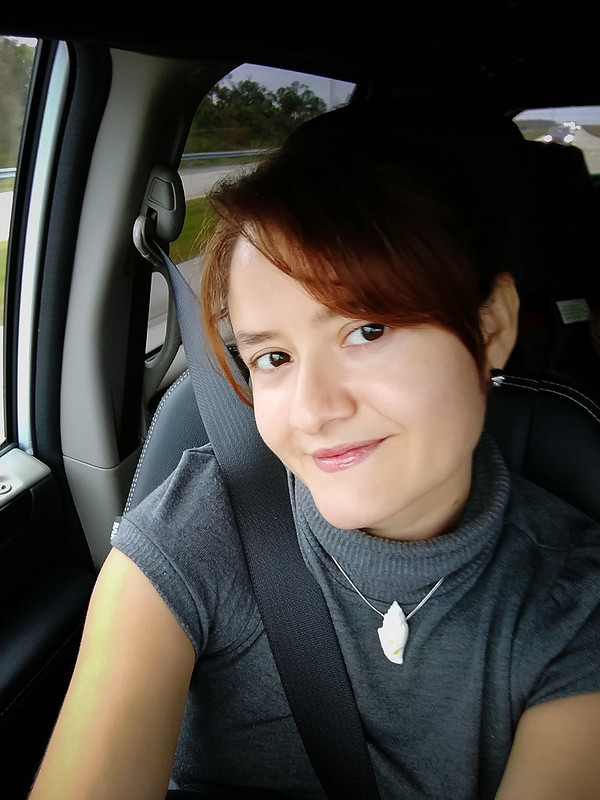 Eventuality #1 – the kids needed to make a pit stop. Sometimes you can see alligators in these waters, but not today. 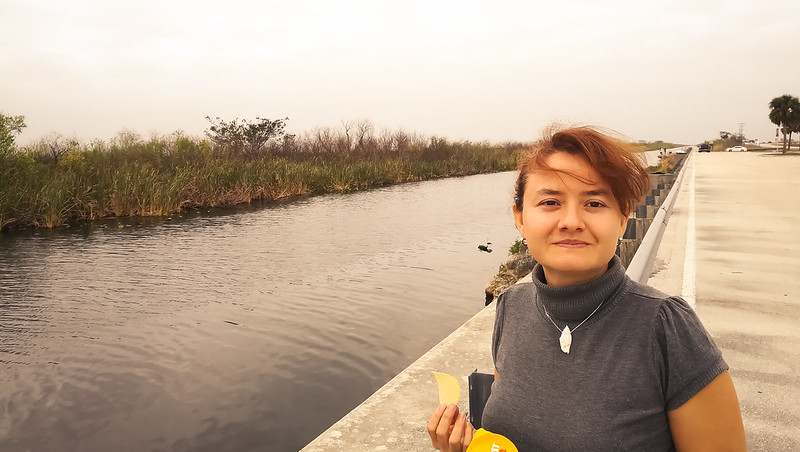 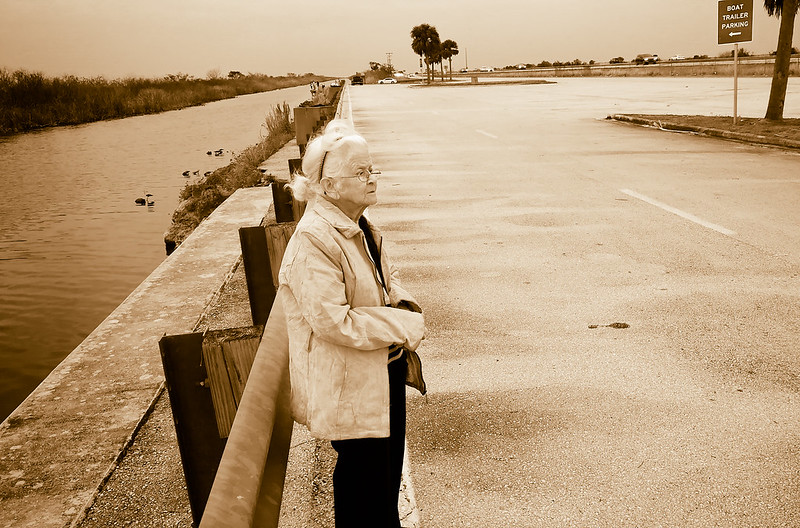 After getting out, I wonder how we’re going to fit in the car again. 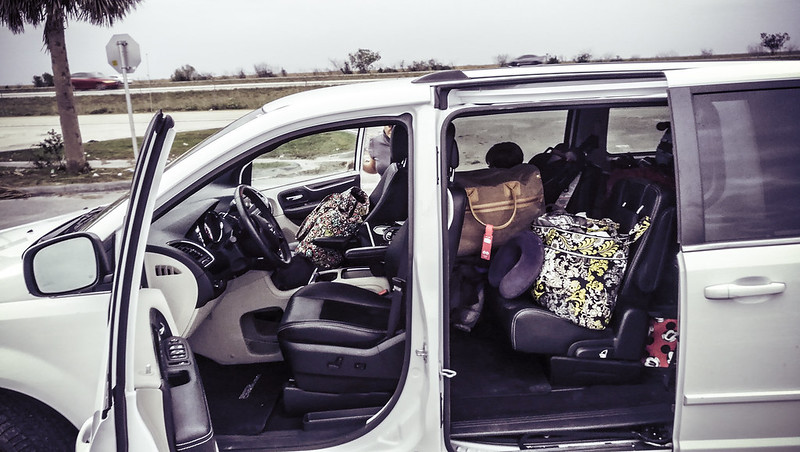 We arrived at the airport! I dropped off the family and the bags and continued to return the car. I returned just as they were getting to the front of the check-in line. Getting through security took about 20 minutes. And, of course, the gate for our flight was the last one in the terminal. Fortunately we got the wheelchair for Mami, and we had the stroller to load bags onto. 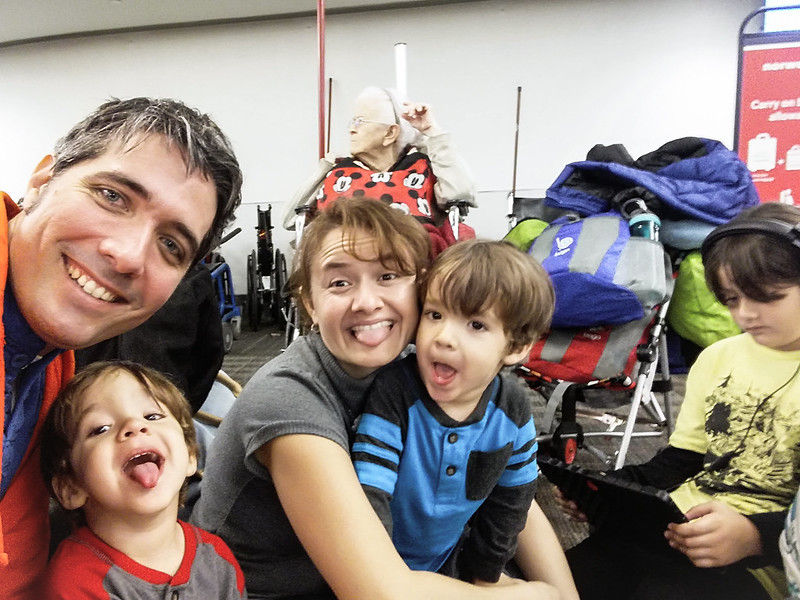 We camped out near the gate and had a picnic. With kids and a wheelchair we were able to board first – along with Alexandra Stevenson and her mom. 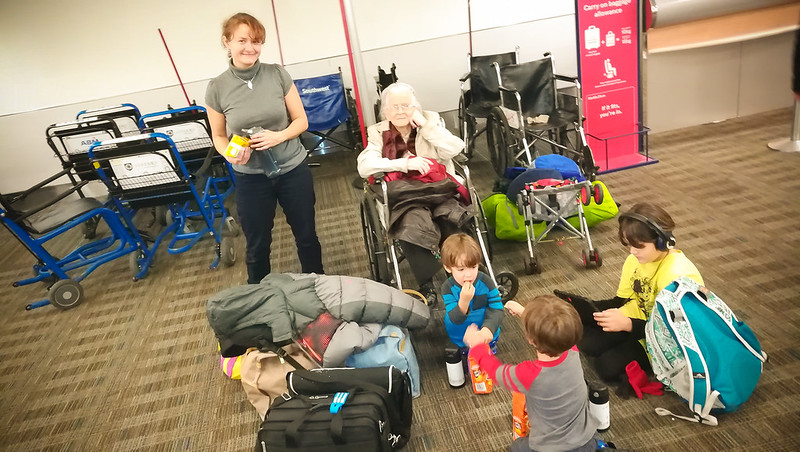 The kids quickly discovered a cool feature of the plane – a selection of games and movies. This kept them quiet and busy for a while. 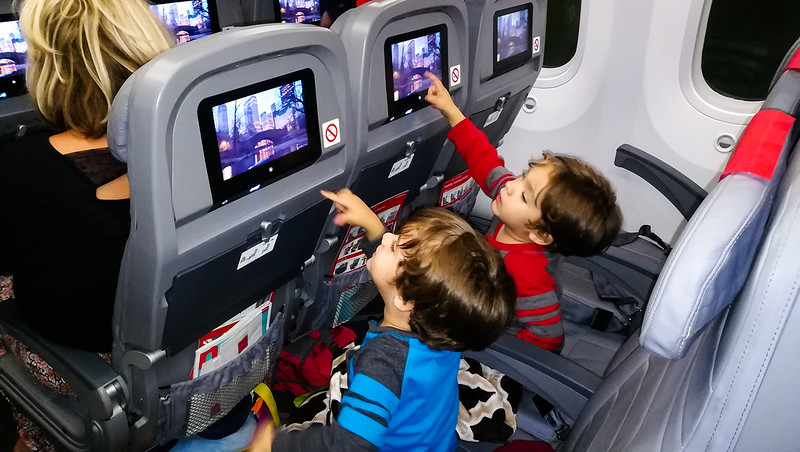 We didn’t reserve our seats, but we managed to get seats together. We filled nearly the entire row. The seats were very comfortable and spacious. 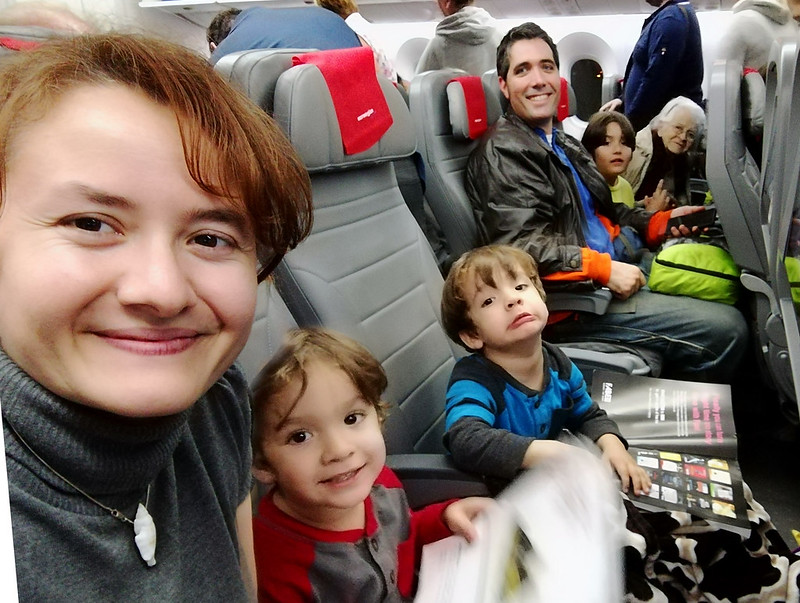 Goodbye Florida! Nearly 8 hours to reach the UK. Time to get some shuteye. 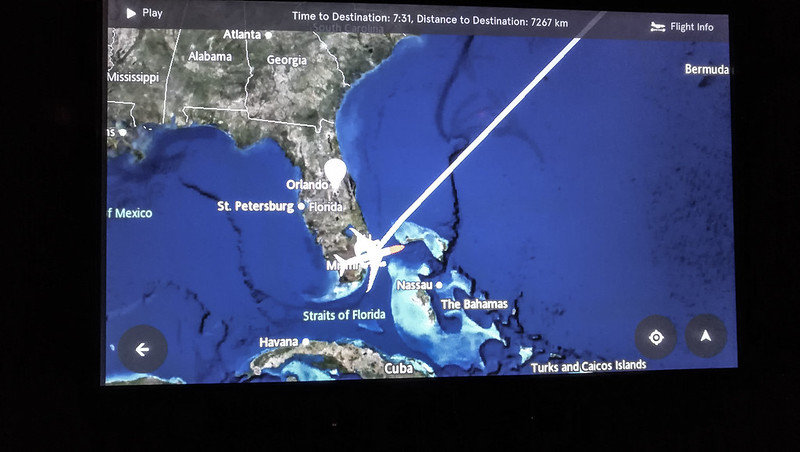 …or take advantage of the in-flight entertainment. 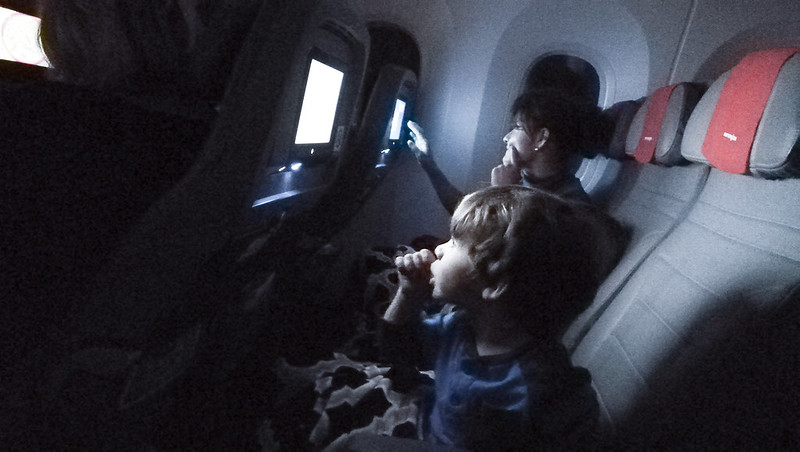 Everyone was able to get some sleep before we approached daylight again. 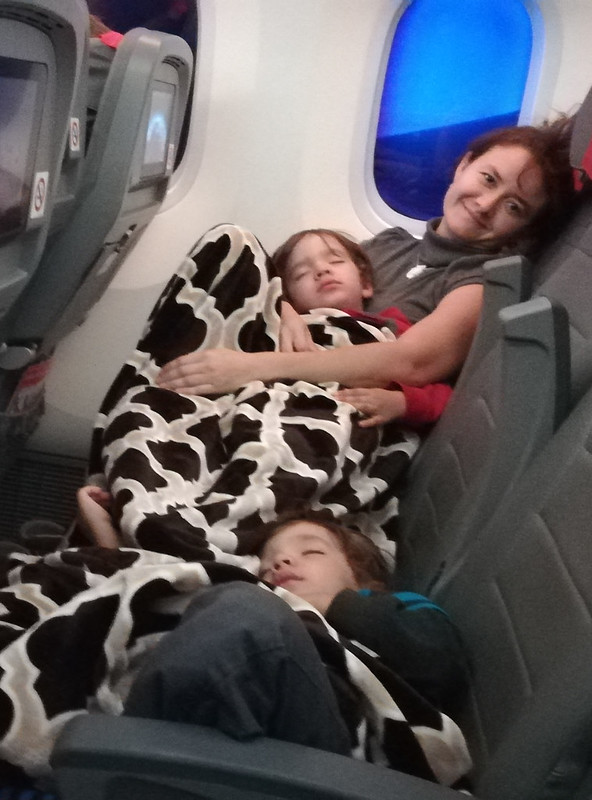 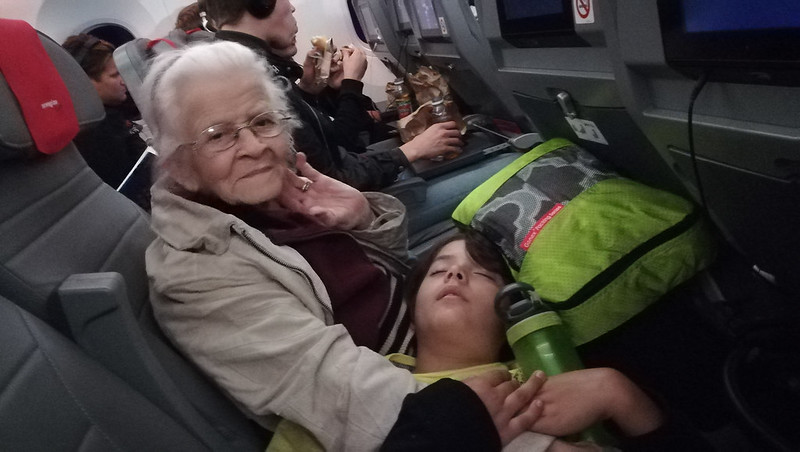 The windows had a cool technology which I was not able to discover exactly how it worked. But rather than using a shutter to keep out the light, there was what appeared to be some system of digital tinting. Tapping a button would increase or decrease the tinting of the window. 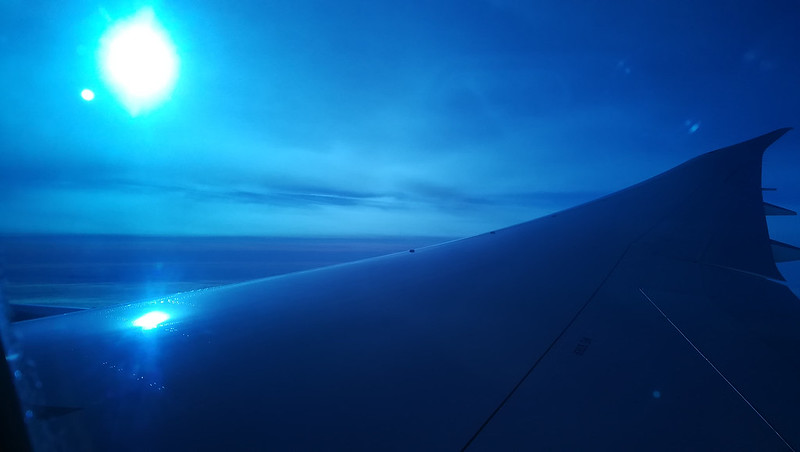 Land! We crossed the Atlantic and only saw land as we neared our destination. 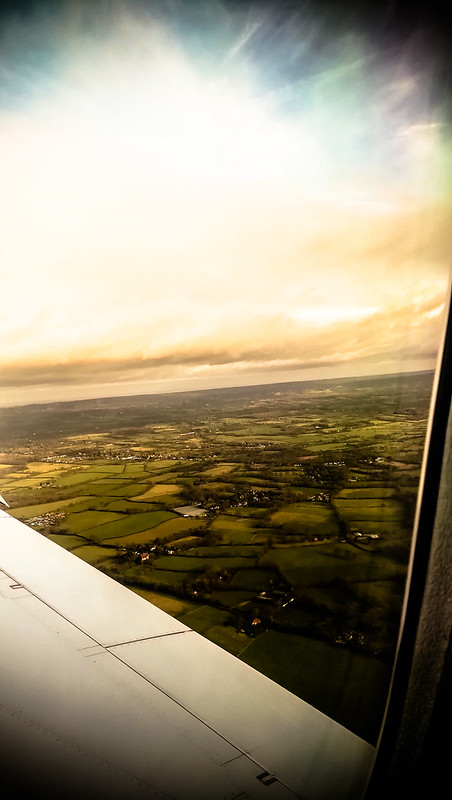 And touchdown at Gatwick airport. 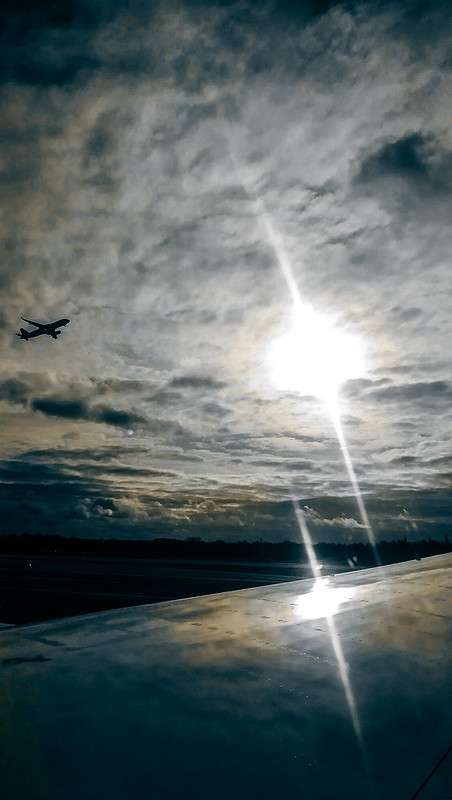 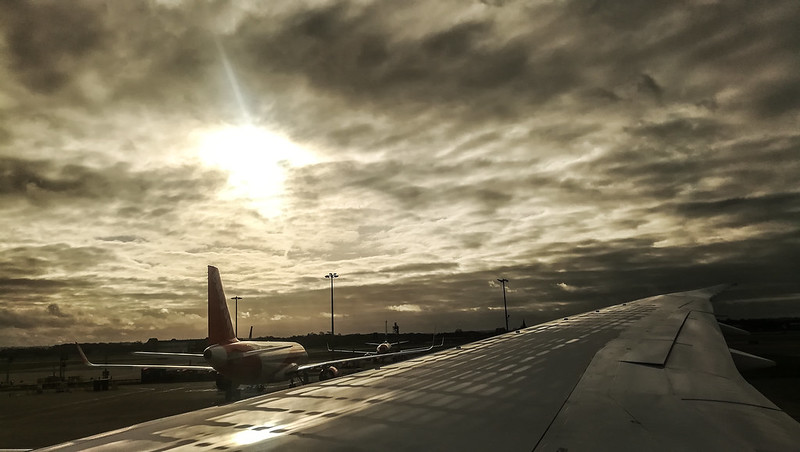 We arrived to Gatwick airport with one way tickets from the US. Our immigration officer asked us the usual questions, one of which is when are you going home. I guess I made the mistake of saying we were going to France next, since then he asked again specifically when we were going back to the US – to which I couldn’t reply with a specific date. After I couldn’t show him a return flight he became suspicious and I became nervous. So I had to explain our situation to him, and give him dates of our travel plans. He tried to tell us that we couldn’t do that, but I told him that we could (to the best of my knowledge). Finally, he went for backup and brought another officer. She asked about our family, work, school. And when they finally got the idea of our situation they agreed to let us enter, but said, “please, make sure you leave the UK!” That welcome was good enough for us!

So, no photos of that experience, but here’s a rent-a-car a Suzuki 8-seater. It was huge – just what we needed. 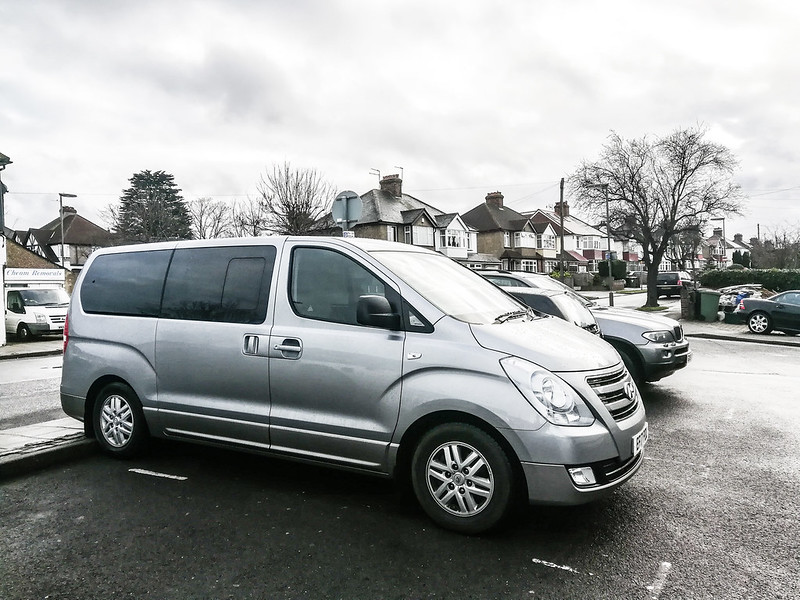 Time to experience right-hand driving! Just about everything is reversed. (Every time I went to put my signal, I turned on the windshield wiper instead) 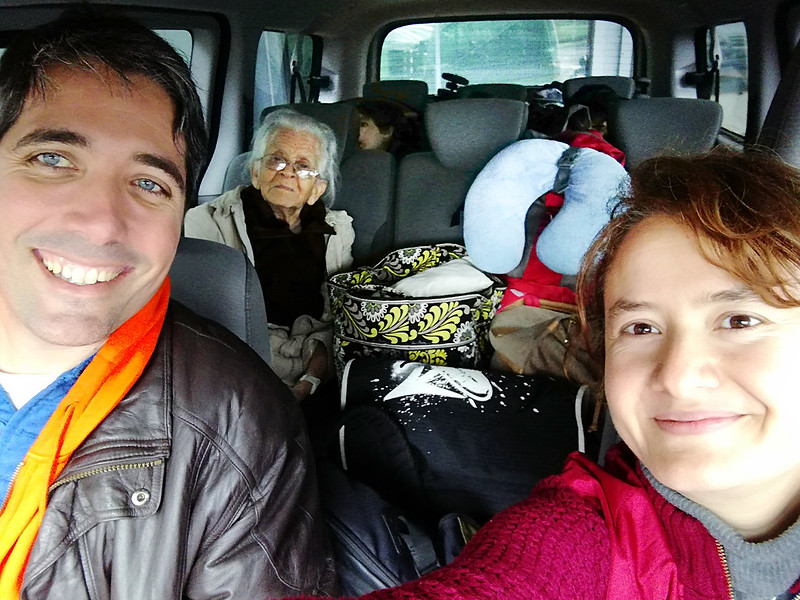 I’ve been a passenger but never a driver in the UK before. I didn’t want to make any mistakes so I started very slowly and cautiously (repeating “left side, left side” in my mind). I got a lot of training the first day – 308 miles to be exact. Ruth was tense most of the time! The feel for how the car is centered in the lane is different as you’re sitting on the other side of the car, so I was hugging the left shoulder pretty closely. 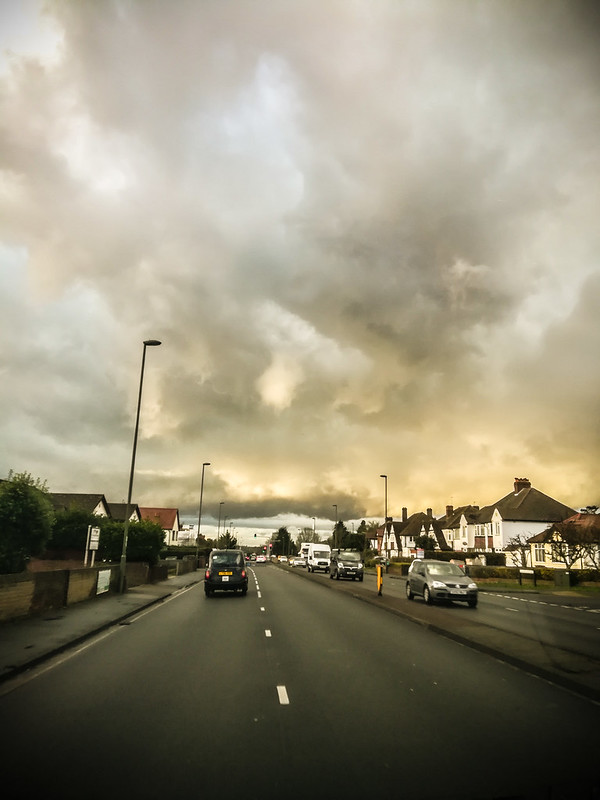 Time for some breakfast – lunch? – so we stopped to get some traditional British food, kebabs! 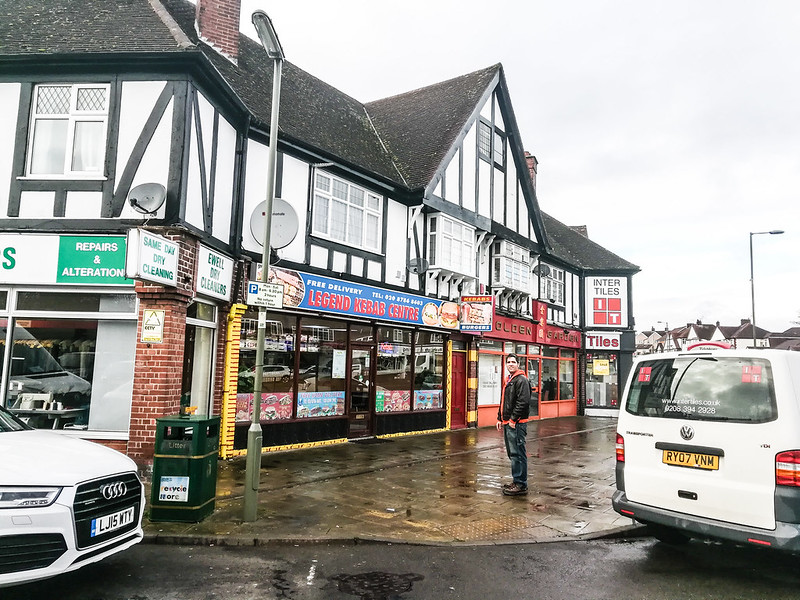 We went to take a look at a car for sale, but it was a non-starter – literally! He had to jump it and we jumped back in our car and got outta there. 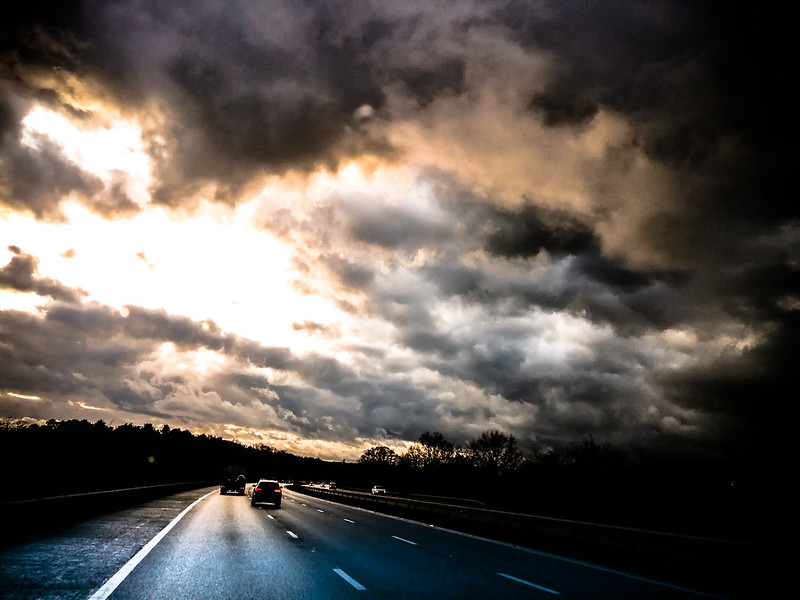 I think they got the Beatles’ lyric wrong here – either that or they’re trying to tell newcomers to give “mushy peas” a chance. 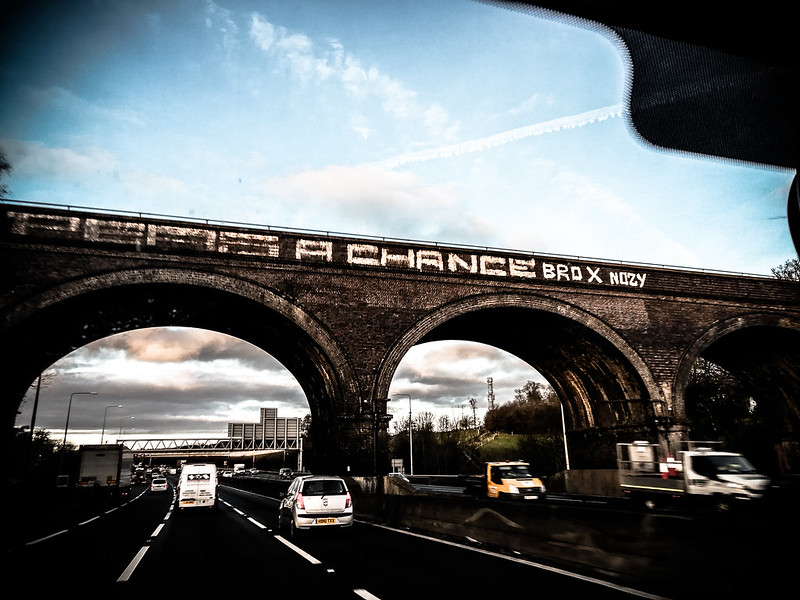 The GPS told us 5 hours to reach Cornwall, but it took us closer to 9 hours. We needed to make some pit-stops, including one at Stonehenge, though we only got to see Woodgate. 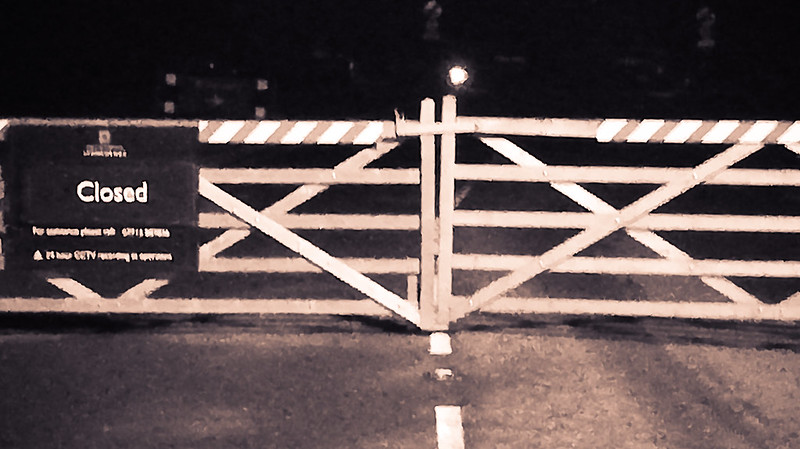 We finally made it to our AirBNB in Bodmin, Cornall at midnight. We helped ourselves in and unloaded our luggage. Due to jetlag and sleeping in the car we didn’t all fall asleep until about 3am.